In 2006, when I was 14 years old, I set my first foot on Chinese ground in Shanghai. I remember being amazed by the amount of colors, lights, people, billboards, and especially all the characters everywhere around me. The idea so many people could read these ‘pictures’ and have a common understanding of their meaning made me dazzle. Let alone they could make songs, rhymes, poems, etc. with these complicated ‘pictures’. “If their language is already so different than ours” – I pondered, “What more secrets can be discovered in this foreign culture?” Later, I learned that less than 30 years ago, cities in China did not look this colorful and lively at all.

Since 1978, China allowed commercial papers, magazines and television stations which were fully financed by advertisement. From that time, China’s graphic design history began to take shape. Compared to the west, China is relatively late with the development of graphic design, because before the ‘open gate’ policy, most design was in the form of propaganda of communism. Except for Japan, the styles of advertisement design in Asia have a western influence. However, as is very common for design, it remains strongly culturally bound. Advertising can be seen as a reflection of consumers’ culture. When analyzing several advertisements from China, these cultural aspects became quite clear. As illustrated below, differences in advertisement styles from the Netherlands and China are also very obvious. Strong contradictions exist in, for example, the use of colors and amount of applied graphics and text. Specifically characters are very suitable for creative expression. It goes without saying Chinese use characters in many creative ways with only one thing that matters: overall feeling. In contrast to the Netherlands, China is a high-context culture. For this reason literal visuals and texts are used in Dutch communications, whereas in China symbolic visuals and the ‘unspoken’ words are more important. 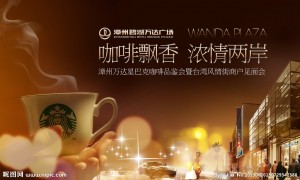 Text in this advertisement from Starbucks rhymes and contains rhythm, it sounds very pleasant and the characters are pretty. The first four characters end with ‘xiang’, the second four end with ‘an’. In making an attempt to give a translation, the result was: ‘coffee odour spreads, floats, and the strong feeling (passion) reaches both sides (coasts)’. Could it be the translation of the American Starbucks slogan ‘Love is in the air and it smells like coffee’? Time to consult a native Chinese speaker. Anyway, trying to make sense out of such slogans in another language will certainly be a lost in translation. 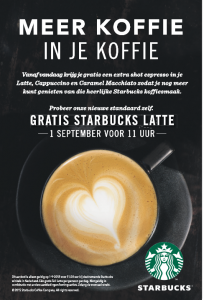 In this advertisement a typical Dutch way of communication is obvious. It says: ‘More coffee in your coffee’ and with it Starbucks offers an extra free espresso in your drink. Could there be a more direct way of making this clear? No fancy rhymes or double meanings whatsoever. Even Google Translate provides the right interpretation.

The Dutch company Groenten FruitHuis values open communication towards customers to let them know where their fruit and vegetables come from, hence it is very important to adjust promotion in China in order to deliver the message clearly. Some keywords that are related to Chinese advertising appeal are technological, status, enjoyment, vain, natural, effective, youth, joyful, traditional, and family. Next to this, Chinese prefer a soft approach, especially with symbolic values and focus on group and consensus when communicating to the mass.

The Netherlands is ranked as number one exporter of fresh vegetables and number four of fresh fruit. Luckily for Groenten FruitHuis, Chinese become increasingly aware of food safety and favor imported and biological products, although this also means a huge responsibility for the Dutch company. They have to maintain a good reputation, because just like the baby food scandal in China proofed: once it is gone, it is always gone, no matter who was to blame. To make this clearer, would you ever consume the delicacy shark fin soup again if you knew what kind of bloody business lies behind it? It happened in Japan, shark fins were cut off before the sharks were thrown back into the sea. This is just one small example of food scandals happening in the world. Once, there was an era where these kind of scandals stayed local. But nowadays, with the Internet and specifically social media, things can hardly be kept a secret. In times of crisis, it is absolutely crucial to be prepared and have good crisis communication to protect the company. The four phases companies normally go through when something like this happens is 1. Ignore the problem; 2. Fight; 3. Explain; 4. Comply with pressure groups. Remember, it is all about trust and good communication with stakeholders. Sooner or later, businesses without conscience will be discovered and they will not be tolerated.

This picture makes clear that the export of Dutch fruit and vegetables to China was growing between 2011 and 2013. The green color indicates an increase in export, while the red color means a decrease.

In 2014, I visited China again to study in Tianjin. China was partly familiar to me, but also very unfamiliar in many ways. I was amazed by the way Chinese interaction had developed to a new dimension. Very soon I found out I could not communicate easily with my classmates and Chinese friends if I did not have ‘WeChat’. Every Chinese at every level of society uses this application for literally anything. With regard to promotion, WeChat offers immense possibilities for companies. Consequently, it will be necessary and at the same time an enormous challenge for Groenten FruitHuis to discover a way to apply a different style of promotion, while also using different channels.